skip to main | skip to sidebar

Presentation of the Interregional Residency Programme
British Council’s Creative Collaborations programme.
The presentation is followed by a reception.

Platform Garanti is pleased to announce the launch of Accented, an interregional residency program. Accented Residency is part of the British Council’s Creative Collaboration programme. The overall aim of the Creative Collaborations programme is to enrich the cultural life of Europe and its surrounding country and to build trust and understanding across communities by generating dialogue and debate.

Accented offers a total of 20 curators, artists, and writers the opportunity to undertake six to eight-week residencies at the participating institutions over the course of 2009 and 2010.

Following the fall of the Berlin Wall, numerous exhibitions have been organized by West European institutions with a focus on East Europe. After 9/11, these gave way to projects featuring the Southeastern Mediterranean region. While one can understand the desire for inclusion, the research around post-traumatic conditions, and/or different approaches to the "Muslim" world, the meeting points of the cultural producers have been external to the regions they practice in. The complex impediments facing the production; the concrete hindrances to travel; the lack of public support; the ineffectual organizational structures, have lead artists traditionally to convene in Western Europe. However, cultural and political similarities, as well as centuries of shared histories ask for lateral relations to be empowered. British Council’s Creative Collaborations program places importance on these issues aiding the development of regional bonds.


Organized by Platform Garanti Contemporary Art in the context of Lille3000 for Europe XXL, "Global Mockery" is the first large-scale exhibition of works by artist Hüseyin Bahri Alptekin after his passing away in December 2007.

Presented on the two floors of the maison Folie de Wazemmes, “Global Mockery” includes important works from Alptekin's oeuvre such as the 1992 version of Heterotopia, the installation Winter Depression, the sculptural work Karakum and stop-motion videos from the Incident-s series previously shown in the Turkish Pavilion at the 2007 Venice Biennial. 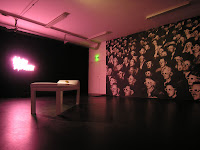 Many of the works in the exhibition, such as the over-sized cheap oil cloth Karakum (Black Sand) bag, pay witness to Alptekin's acute interest in the human condition after the fall of the Berlin Wall in 1989 and the resulting enormous human traffic, as well as the migration of authorless images that followed it. This work embodies an intercultural travel log through its transformation of the Camel cigarette logo into the adornment of a cheap bag, a reference to the part of the world where the exotic potpourri of Central Asian and Middle Eastern imagery that brands the Camel cigarette packet was originally taken from. In dialogue with the migratory references in Karakum, Heterotopia presents a plane of anonymously rendered images and objets trouvés of history and contemporaneity, juxtaposed and set in friendly tension alongside one another. 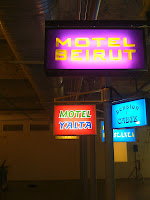 After pursuing graduate studies in aesthetics, the philosophy of art and sociology at the Sorbonne, Hüseyin Bahri Alptekin remained in Paris as a photographer for Sipa Press in the 1980s. Steeped in European philosophy, semiotics and post-structuralist ideas emerging in France during this time, Alptekin returned to Turkey at the end of the decade, where he taught the philosophy of art.

In 1990, Alptekin began to make art, fusing associative images and objects in bric-a-brac installations. Befitting a philosopher turned artist, his oeuvre is not unified stylistically, but by an ambitious set of themes.

Alptekin took part in numerous international exhibitions including the Istanbul Biennial in 1995 and 2005, the Bienal de São Paulo in 1998, the 2002 Cetinje Biennale in Montenegro, the Tirana Biennial in 2003 and 2005 and Manifesta 5 in 2004. Along with numerous international residencies, Alptekin won a UNESCO prize for his work in the Cetinje Biennale, and the M. Mulliqi Prize at the 3rd International Exhibition at Kosovo Art Gallery, Prishtina, in 2005. As a curator, Alptekin organized exhibitions and events in Istanbul, Tirana, Havana and Helsinki, including cultural activities during Istanbul’s 1996 Habitat II NGO-City Summit.

Alptekin represented Turkey in the Arsenale at the 2007 Venice Biennale with the installation Don’t Complain (2007), where he screened 14 different videos made from hundreds of assorted snapshots taken on his travels around the world that he called “Incidents” five wooden huts. Don’t Complain brought together disparate geographies through the images, connecting places as far apart as Mumbai and Rio de Janeiro.

Platform Garanti houses the archive and library of Hüseyin Bahri Alptekin. The institution is also engaged in a comprehensive study of the artist's career and life.
Posted by resmi görüş at 6:31 AM

The "Transdisciplines" lecture series organized by Garanti Gallery-Platform Garanti continues with Ciro Najle. Najle will introduce the concept of tectonic machine as a model of architectural production, and will present a few samples and offshoots of its operativity.

Ciro Najle Director of GDB (General Design Bureau), architectural office and multidisciplinary laboratory of research in Buenos Aires, Design Critic at the Harvard University Graduate School of Design, and Visiting Professor at the Universidad Tecnica Federico Santa Maria in Valparaiso. He has taught at architectural schools worldwide, including Architectural Association, Cornell University, Columbia University, the Berlage Institute, and the University of Buenos Aires. He was awarded Young Architect of the Year Second Prize in London in 2001. Coeditor of "Landscape Urbanism: A Manual for the Machinic Landscape," he is currently working on the upcoming book "Material Discipline."
Posted by resmi görüş at 11:40 PM